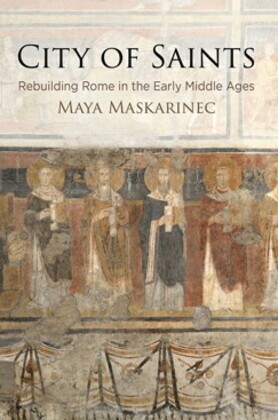 It was far from inevitable that Rome would emerge as the spiritual center of Western Christianity in the early Middle Ages. After the move of the Empire's capital to Constantinople in the fourth century and the Gothic Wars in the sixth century, Rome was gradually depleted physically, economically, and politically. How then, asks Maya Maskarinec, did this exhausted city, with limited Christian presence, transform over the course of the sixth through ninth centuries into a seemingly inexhaustible reservoir of sanctity?

Conventional narratives explain the rise of Christian Rome as resulting from an increasingly powerful papacy. In City of Saints, Maskarinec looks outward, to examine how Rome interacted with the wider Mediterranean world in the Byzantine period. During the early Middle Ages, the city imported dozens of saints and their legends, naturalized them, and physically layered their cults onto the city's imperial and sacred topography. Maskarinec documents Rome's spectacular physical transformation, drawing on church architecture, frescoes, mosaics, inscriptions, Greek and Latin hagiographical texts, and less-studied documents that attest to the commemoration of these foreign saints. These sources reveal a vibrant plurality of voices—Byzantine administrators, refugees, aristocrats, monks, pilgrims, and others—who shaped a distinctly Roman version of Christianity. City of Saints extends its analysis to the end of the ninth century, when the city's ties to the Byzantine world weakened. Rome's political and economic orbits moved toward the Carolingian world, where the saints' cults circulated, valorizing Rome's burgeoning claims as a microcosm of the "universal" Christian church.