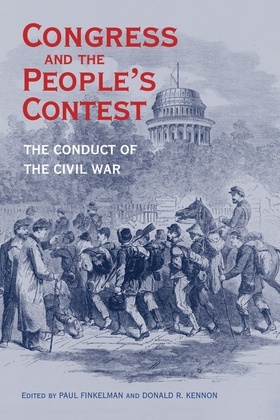 Congress and the People’s Contest

The American Civil War was the first military conflict in history to be fought with railroads moving troops and the telegraph connecting civilian leadership to commanders in the field. New developments arose at a moment’s notice. As a result, the young nation’s political structure and culture often struggled to keep up. When war began, Congress was not even in session. By the time it met, the government had mobilized over 100,000 soldiers, battles had been fought, casualties had been taken, some civilians had violently opposed the war effort, and emancipation was under way.

This set the stage for Congress to play catch-up for much of the conflict. The result was an ongoing race to pass new laws and set policies. Throughout it all, Congress had to answer to a fractured and demanding public. In addition, Congress, no longer paralyzed by large numbers of Southern slave owners, moved forward on progressive economic and social issues—such as the transcontinental railroad and the land grant college act—which could not previously have been passed.

In Congress and the People’s Contest, Paul Finkelman and Donald R. Kennon have assembled some of the nation’s finest scholars of American history and law to evaluate the interactions between Congress and the American people as they navigated a cataclysmic and unprecedented war. Displaying a variety and range of focus that will make the book a classroom must, these essays show how these interactions took place—sometimes successfully, and sometimes less so.