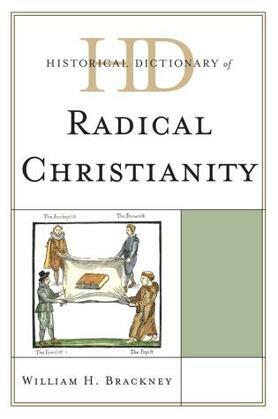 There are several eras in the history of Christianity radical forms of the tradition are obvious: the early church of the first five centuries, the medieval era, the age of reform, the early modern era, and the contemporary era. Radical Christian activity and experience may reflect either a primary or a derived level of spirituality. New converts may join a sect or movement with radical characteristics; or they may become dissatisfied with their initial Christian experiences and desire a different or deeper Christian spirituality, usually closely parallel to that seen in the New Testament.

The Historical Dictionary of Radical Christianity covers the history of this movement and includes an introductory essay and a bibliography. The dictionary section has over 400 cross-referenced entries. The dictionary entries selected reflect the leading groups, movements, and sects from each major era of Christian history. Especially in the contemporary period, the great proliferation of radical thinkers and groups has necessitated a selection process with those selected exhibiting sustained group activity, possessing an identifiable following, and demonstrating a significant cultural impact. This book is an excellent access point for students, researchers, and anyone wanting to know more about Radical Christianity.