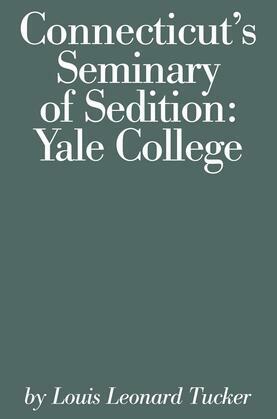 From the Preface: In the 1700s, American colleges like Yale were hotbeds of intellectual activity that lead the country to revolution. According to author Louis Tucker, this volume is a study that “seeks to assess the role of Yale College in the American Revolution. It especially focuses on the part played by Yale in the development of the spirit of rebellion in Connecticut…A number of Yale trained Whigs carried the torch of rebellion into other colonies and assumed roles of leadership when the political crisis deepened.”

As one phase of the Bicentennial observation, The American Revolution Bicentennial Commission of Connecticut has authorized scholars in a wide range of study to write a series of monographs on the broadly defined Revolutionary Era of 1763 to 1787. These monographs [appeared] yearly beginning in 1973 through 1980. Emphasis is placed upon the birth of the nation, rather than on the winning of independence on the field of battle.