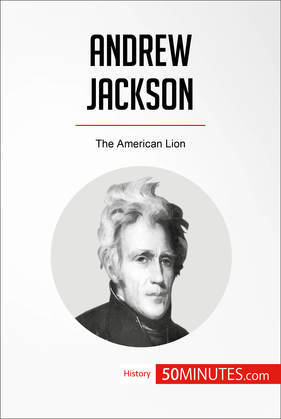 Keen to learn but short on time? Get to grips with the life and career of Andrew Jackson in next to no time with this concise guide.

50Minutes.com provides a clear and engaging analysis of the life, times and career of Andrew Jackson, the seventh president of the United States. Described by the French historian Alexis de Tocqueville as "a man of violent disposition and mediocre ability" who wholly lacked "the necessary qualities to govern a free nation", Jackson nonetheless enjoyed great popular support and still graces the American $20 bill. How can this startling discrepancy be explained? This guide provides a balanced evaluation of Jackson's presidency, considering both his successes, such as his role in strengthening democracy and political participation in the USA, and his failings, namely his decision to dismantle the country's national bank and his complicity in the appalling mistreatment of Native Americans in the Southern states.

In just 50 minutes you will:
oLearn about Jackson's early life and his decisive role in the War of 1812 between Britain and the USA
oUnderstand his political beliefs, his main actions as president and their impact on American politics
oDiscover the numerous criticisms that have been levelled at him by modern historians