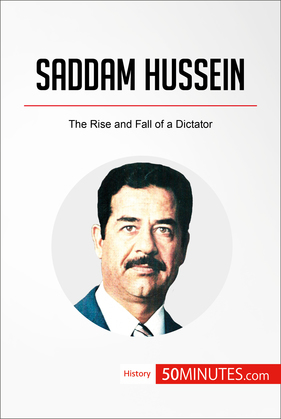 Keen to learn but short on time? Get to grips with the life of Saddam Hussein in next to no time with this concise guide.

50Minutes.com provides a clear and engaging analysis of the rise and fall of Saddam Hussein. Following a series of bloody coups, Saddam Hussein came to power in Iraq in 1979 and quickly established an authoritarian dictatorship that endured for over twenty years. His leadership was characterised by a series of wars, including his invasion of Kuwait in 1990, which culminated in a brutal defeat at the hands of a US-led coalition and hefty UN sanctions being imposed on Iraq. Saddam Hussein was removed from power in 2003, but Iraq had been left heavily weakened by years of poverty and repression, and soon found itself facing a new enemy in the form of Daesh.

oLearn about the historical events that paved the way for Saddam Hussein's rise to power
oUnderstand the various conflicts that arose in the Middle East during the dictatorship, including the Iran-Iraq War and the Gulf War
oDiscover how the situation in Iraq has developed since Saddam Hussein was deposed