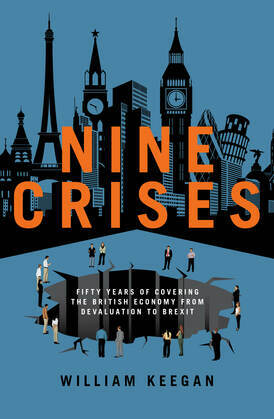 Nine Crises combines the author’s memories of Chancellors of the Exchequer, Governors of the Bank of England, influential economists and Fleet Street legends with vignettes on nine major economic crises, to tell the story of how the British economy seems to lurch from one disaster to another but somehow survives, or at least until now.

In a book peppered with anecdotes and memories from the author’s widespread political connections, Keegan draws on his own unparalleled experience to explore, among others – the 1967 devaluation, the three-day week, Black Wednesday and the 2008 global financial crisis – and explains why the prospect of Brexit is potentially the biggest crisis he has witnessed in fifty years.

An important and timely book, as the spectre of Brexit poses an existential threat to a future of the British economy.