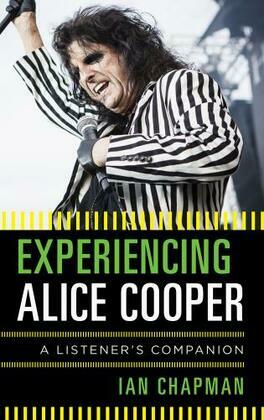 Experiencing Alice Cooper: A Listener’s Companion takes a long overdue look at the music and stage act of rock music’s self-styled arch-villain. A provocateur from the very start of his career in the mid-1960s, Alice Cooper, aka Vince Furnier, son of a lay preacher in the Church of Jesus Christ, carved a unique path through five decades of rock’n’roll.

Despite a longevity that only a handful of other artists and acts can match, Alice Cooper remains a difficult act and artist to pin down and categorize. During the last years of the 1960s and the heydays of commercial success in the 1970s, Cooper's groundbreaking theatricality, calculated offensiveness, and evident disregard for the conventions of rock protocols sowed confusion among his critics and evoked outrage from the public. Society’s watchdogs demanded his head, and Cooper willingly obliged at the end of each performance with his on-stage self-guillotining. But as youth anthem after youth anthem - “I’m Eighteen,” “School’s Out,” “Elected,” “Department of Youth”—rang out in his arena concerts the world over and across airwaves, fans flocked to experience Cooper’s unique brand of rock. Critics searched for proper descriptions: “pantomime,” “vaudeville,” “retch-rock,” “Grand Guignol.” In 1973 Cooper headlined in Time magazine as “Schlock Rock’s Godzilla.”

In Experiencing Alice Cooper: A Listener’s Companion, Ian Chapman surveys Cooper’s career through his twenty-seven studio albums (1969-2017). While those who have written about Cooper have traditionally kept their focus on the stage spectacle, too little attention has been paid to Cooper’s recordings. Throughout, Chapman argues that while Cooper may have been rock’s most accomplished showman, he is first and foremost a musician, with his share of gold and platinum albums to vouch for his qualifications as a musical artist.