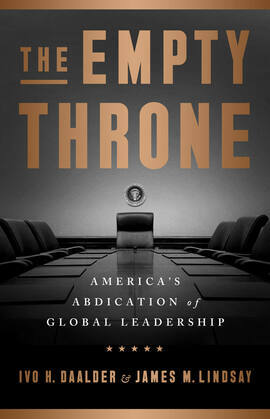 The Throne Is Empty

by Ivo Daalder (Author), James Lindsey (Author)
Nonfiction Social science Political science International relations Diplomacy
American diplomacy is in shambles under Trump, but beneath the surface chaos is an erosion of the postwar order that is even more dangerous.
American foreign policy is adrift. For seventy years, the world order that the United States fashioned out of the ruins of World War II produced unprecedented global stability and prosperity. Donald Trump campaigned for the White House pledging to do things differently in foreign affairs, which critics argue threatens this world order. What Trump's staunchest critics fail to realize, though, is this order has been fraying for years. Ivo Daalder, former ambassador to NATO and the president of the Chicago Council on Global Affairs, and James Lindsay, a senior vice president at the Council of Foreign Relations, give us a chilling account of why things are worse than they seem.

At its core the U.S.-led world order has been a victim of its own success. The unprecedented period of peace produced record economic growth. Once poor countries like China, India, and Brazil prospered, and as they grew richer, they increasingly contested both the rules and America's privileged position within the order. At the same time, as the costs grew, many Americans soured on the benefits of global leadership, especially as their own prospects for a better life dimmed.