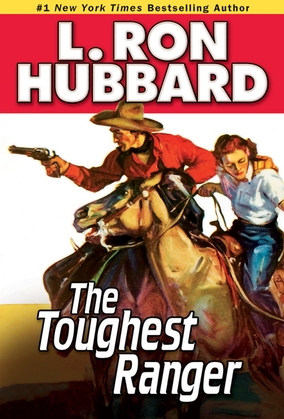 by L. Ron Hubbard (Author)
Fiction Action & Adventure Westerns Historical
EPUB
unlimited loans, One at a time
Details
A perfect role for a young Kevin Costner, saddle tramp Petey McGuire has been kicked around so long, he’d run away from his own shadow if he could. But there’s one fight he can’t run from—the fight against hunger. Petey needs a job quick. But the only way to get one is to act cool and talk tough. And he succeeds all too well—landing in the saddle with the Arizona Rangers . . . where he learns exactly what it takes to face the meanest outlaw and win the prettiest girl.

Born and raised in the twilight of the Old West—from Nebraska plain to the mountains of Montana—L. Ron Hubbard grew up in the company of real cowboys and rugged frontiersmen, even becoming a blood brother to a Blackfoot medicine man. His firsthand knowledge allowed him to instill a grit and authenticity into his stories that made him one of the leading writers of Westerns, publishing a total of 34 of them by the 1950s.

Also includes the Western adventures, Silent Pards, in which an old prospector takes on a couple of wicked enemies with the help of some surprising friends, and The Ranch That No One Would Buy, the story of a young stranger who’s about to pull off a killer of a deception.

“An exciting Western story filled with both action and adventure.” —Mommy’s Favorite Things