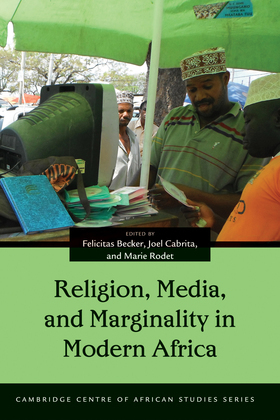 In recent years, anthropologists, historians, and others have been drawn to study the profuse and creative usages of digital media by religious movements. At the same time, scholars of Christian Africa have long been concerned with the history of textual culture, the politics of Bible translation, and the status of the vernacular in Christianity. Students of Islam in Africa have similarly examined politics of knowledge, the transmission of learning in written form, and the influence of new media. Until now, however, these arenas—Christianity and Islam, digital media and “old” media—have been studied separately.

Religion, Media, and Marginality in Modern Africa is one of the first volumes to put new media and old media into significant conversation with one another, and also offers a rare comparison between Christianity and Islam in Africa. The contributors find many previously unacknowledged correspondences among different media and between the two faiths. In the process they challenge the technological determinism—the notion that certain types of media generate particular forms of religious expression—that haunts many studies. In evaluating how media usage and religious commitment intersect in the social, cultural, and political landscapes of modern Africa, this collection will contribute to the development of new paradigms for media and religious studies.