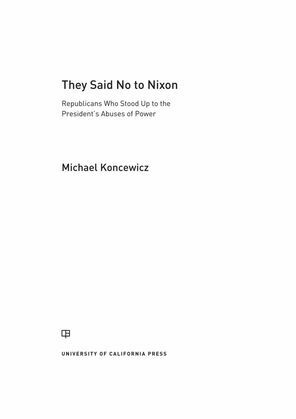 They Said No to Nixon

Have we learned everything about the dark side of Richard Nixon? The truth is, we haven’t even scratched the surface. They Said No to Nixon: Republicans Who Stood Up to the President’s Abuses of Power uncovers the stories of administration officials who prevented Watergate from becoming an even worse constitutional crisis. Using unpublished excerpts from the Nixon tapes and other recently released material, Michael Koncewicz shows us how several Republicans chose a loyalty to their roles as civil servants over Nixon’s attempts to expand the imperial presidency.