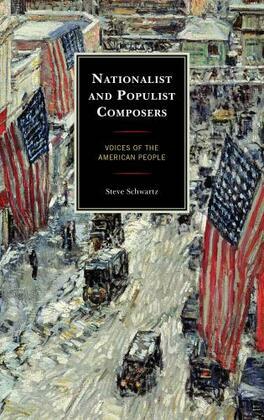 Populism and nationalism in classical music held a significant place between the world wars with composers such as George Gershwin, Aaron Copland, and Leonard Bernstein creating a soundtrack to the lives of everyday Americans. While biographies of these individual composers exist, no single book has taken on this period as a direct contradiction to the modernist dichotomy between the music of Stravinsky and Schoenberg.

In Nationalist and Populist Composers: Voices of the American People, Steve Schwartz offers an overdue correction to this distortion of the American classical music tradition by showing that not all composers of this era fall into either the Stravinsky or Schoenberg camps. Exploring the rise and decline of musical populism in the United States, Schwartz examines the major works of George Gershwin, Randall Thompson, Virgil Thomson, Aaron Copland, Roy Harris, Kurt Weill, Morton Gould, and Leonard Bernstein. Organized chronologically, chapters cover each composer’s life and career and then reveal how key works participated in populist and nationalist themes.

Written for the both the scholar and amateur enthusiast interested in modern classical music and American social history, Nationalist and Populist Composers creates a contextual frame through which all audiences can better understand such works as Rhapsody in Blue, Appalachian Spring, and West Side Story.