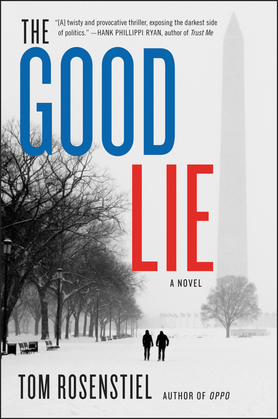 When a shadowy American diplomatic complex is attacked in North Africa, the White House is besieged by accusations of incompetence and wild conspiracy theories. Eager to learn the truth, the president and his staff turn to Peter Rena and his partner, Randi Brooks. The investigators dive headfirst into the furtive world of foreign intelligence and national security, hoping to do it quietly. That becomes impossible, though, when it blows up into an all-out public scandal: Congress opens hearings and a tireless national security reporter publishes a bombshell exposé.

Now, Rena and Brooks are caught in the middle. The White House wants to prevent debilitating fallout for the president, the military appears to be in shutdown mode, the press is hungry for another big story, and rival politicians are plotting their next move. Rena learns the hard way that secrets in Washington come with a very high price.

With intelligence, style, and a breakneck pace, The Good Lie explores the contours of secrets, lies, and the dangers of a never-ending war.

“One of the smartest thrillers in recent memory.” —Dallas Morning News

“A debut that will be remembered for years.” —Michael Connelly