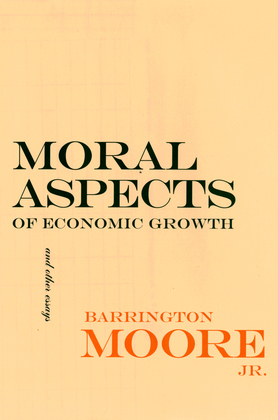 Moral Aspects of Economic Growth, and Other Essays

Barrington Moore, Jr., one of the most distinguished thinkers in critical theory and historical sociology, was long concerned with the prospects for freedom and decency in industrial society. The product of decades of reflection on issues of authority, inequality, and injustice, this volume analyzes fluctuating moral beliefs and behavior in political and economic affairs at different points in history, from the early Middle Ages in England to the prospects for liberalism under twentieth-century Soviet socialism. The social sources of antisocial behavior; principles of social inequality; and the origins, enemies, and possibilities of rational discussion in public affairs—these are among the topics Moore considers as he seeks to uncover the historical causes of some accepted forms of morality and to assess their social consequences.
The keynote essay examines how moral codes grew out of commercial practices in England from medieval times through the industrial revolution. Moore pays special attention to conceptions of honesty and the temptation to evade that inform the volume as a whole. In the other essays, he considers particular political issues, viewing "political" in its broadest sense as an unequal distribution of power and authority that carries a strong moral charge. Free of preaching and advocacy, his work offers a rare reasonable assessment of the morality of major social institutions over time.