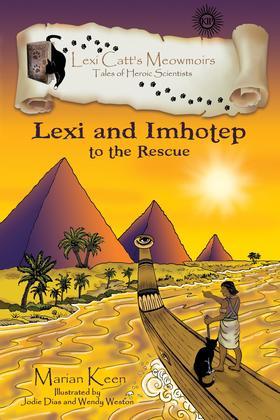 According to myth, cats have nine lives, and Alexander Catt II (also known as Lexi) has spent his former lives with scientists of medicine throughout history. In these adventures, Lexi witnesses medical breakthroughs and discoveries, and learns the value of hard work and integrity. In Lexi and Imhotep to the Rescue, Lexi lives with a fictional character, named after Egypt’s famous physician, Imhotep. The story is set during the reign of Ramses II, and accurately portrays the medical practices of this advanced civilization. Lexi accompanies young Imhotep to Deir el-Medina, where they rid the city of vermin and disease; save workers from a collapsed tomb; and rescue a mysterious young man who asks for forgiveness and then disappears! When Pharoah Ramses the Great is informed, he demands an account, and they make their journey down the Nile.