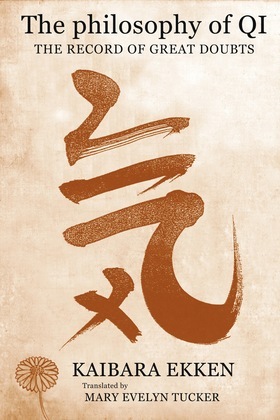 The Philosophy of Qi: The Record of Great Doubts

Kaibara Ekken (1630-1714) was a prominent Japanese scholar who spread Neo-Confucian ideas and moral teachings throughout Japan. He was also known as the "Aristotle of Japan" for his studies of the natural world. Of his many writings, The Record of Great Doubts is the culmination of a lifetime of seeking a unified view of humans and nature. The text represents one of the central reflections in East Asian thought on the significance of qi ch'i, the material force coursing through all life, and is available here for the first time in English with a comprehensive introduction situating Ekken within the currents of his time and within the larger debates of Neo-Confucianism in East Asia.

The Record of Great Doubts emphasizes the role of qi in achieving a life of engagement with other humans, with the larger society, and with nature as a whole. Rather than encourage transcendental escapism or quietism, Ekken articulates a philosophy of material force as a basis of living a life of commitment to the world. In this spirit, moral cultivation is not an isolated or a self-centered preoccupation, but an activity that occurs within the dynamic forces of nature and amid the rigorous demands of society. In this context, a vitalism of qi is an emergent force, not only providing the philosophical grounding for this vibrant interaction but also giving a basis for an investigation of the natural world that plumbs the principle within things. Ekken thus aimed to articulate a creative and dynamic milieu for moral education, political harmony, social coherence, and agricultural sustainability.

The Record of Great Doubts embodies Ekken's profound commitment to Confucian ideas and practices as a method for establishing an integrative ethical vision, one he hoped would guide Japan through a new period of peace and stability. A major philosophical treatise in the Japanese Neo-Confucian tradition, The Record of Great Doubts illuminates a crucial chapter in East Asian intellectual history.