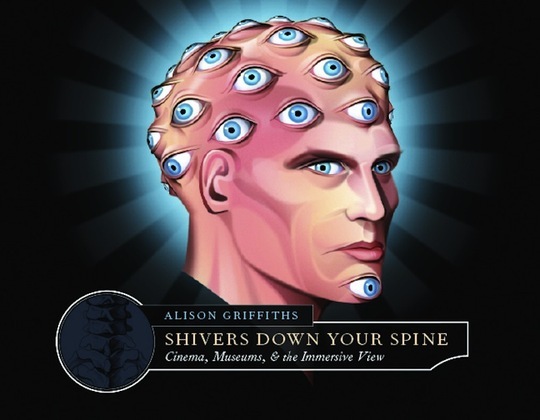 Shivers Down Your Spine: Cinema, Museums, and the Immersive View

From the architectural spectacle of the medieval cathedral and the romantic sublime of the nineteenth-century panorama to the techno-fetishism of today's London Science Museum, humans have gained a deeper understanding of the natural world through highly illusionistic representations that engender new modes of seeing, listening, and thinking. What unites and defines many of these wondrous spaces is an immersive view-an invitation to step inside the virtual world of the image and become a part of its universe, if only for a short time.

Since their inception, museums of science and natural history have mixed education and entertainment, often to incredible, eye-opening effect. Immersive spaces of visual display and modes of exhibition send "shivers" down our spines, engaging the distinct cognitive and embodied mapping skills we bring to spectacular architecture and illusionistic media. They also force us to reconsider traditional models of film spectatorship in the context of a mobile and interactive spectator.

Through a series of detailed historical case studies, Alison Griffiths masterfully explores the uncanny and unforgettable visceral power of the medieval cathedral, the panorama, the planetarium, the IMAX theater, and the science museum. Examining these structures as exemplary spaces of immersion and interactivity, Griffiths reveals the sometimes surprising antecedents of modern media forms, suggesting the spectator's deep-seated desire to become immersed in a virtual world. Shivers Down Your Spine demonstrates how immersive and interactive museum display techniques such as large video displays, reconstructed environments, and touch-screen computer interactives have redefined the museum space, fueling the opposition between public and private, science and spectacle, civic and corporate interests, voice and text, and life and death. In her remarkable study of sensual spaces, Griffiths explains why, for centuries, we keep coming back for more.