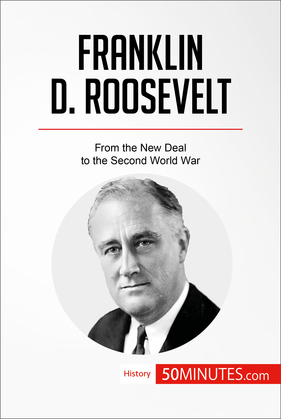 Keen to learn but short on time? Get to grips with the life and career of Franklin D. Roosevelt in next to no time with this concise guide.

50Minutes.com provides a clear and engaging analysis of the life and political career of Franklin D. Roosevelt, the 32nd president of the United States. When Roosevelt was first elected in 1932, the USA was in the midst of the Great Depression, a major economic crisis. Thanks to a series of progressive, interventionist measures known collectively as the New Deal, the new president was able to set the economy on the path to recovery and drastically reduce unemployment. He also steered his country through the Second World War and played a crucial role in the establishment of the postwar world order, notably through his contribution to the creation of the United Nations.

In just 50 minutes you will:
oFind out about Roosevelt's political career, from his days as governor of the state of New York to his four terms as president
oUnderstand the main programmes of the New Deal and their impact on the American economy
oLearn about Roosevelt's leadership during the Second World War and find out how he contributed to the peace process