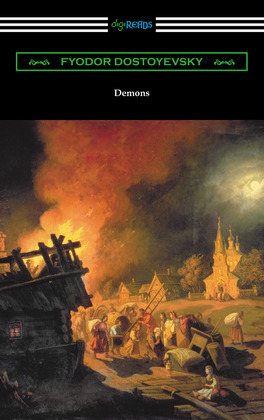 by Fyodor Dostoyevsky (Author)
Fiction
EPUB
Unlimited loans, One at a time
Details

One of Dostoyevsky’s most famous novels, this 1872 work utilizes five main characters and their philosophical ideas to describe the political chaos of Imperial Russia in the nineteenth century. Based on an actual event involving the murder of a revolutionary by his comrades, this novel depicts a band of ruthless radicals attempting to incite revolt in their small, rural community. At the center of “Demons” lies Dostoyevsky’s desire to protest the enthusiasm for revolution he saw all around him, as well as the conservative establishment’s inability to cope with those revolutionary ideas or their consequences. The author considered utopias unobtainable, and he depicts the radicals and the ideas they represent with a frightening savage intensity, as if they were possessed by demons rather than those unrealistic ideas. Perhaps the greatest political novel ever written, Dostoyevsky’s “Demons” fully displays his devastating condemnation of human manipulation through brilliant characterization, as well as his keen and seemingly clairvoyant insight into the hearts of men. This edition follows the translation of Constance Garnett and includes a biographical afterword.