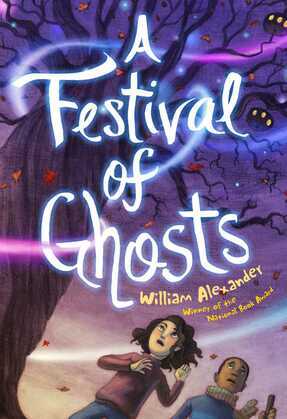 A Festival of Ghosts

National Book Award winner William Alexander conjures up a spooky adventure full of excitement in this entertaining sequel to A Properly Unhaunted Place, which was a New York Times Editors’ Choice.

Rosa Diaz has her hands full of ghosts. She saved the town of Ingot by unleashing all the ghosts who were previously banished. Now, like the rest of the world, Ingot is filled with spirits and poltergeists. But unlike the rest of the world, the town’s living residents have no idea how to cope, and some of the ghosts are holding century-old grudges.

When something supernatural starts stealing kids’ voices at her school, it’s up to Rosa to figure out who or what is behind the voice-snatching. It doesn’t help that some of her classmates are still angry with her for releasing the ghosts. Or that Rosa begins to suspect that she may be haunted herself.

Meanwhile, her best friend Jasper is dealing with what remains of the Renaissance Festival, the town’s pride and joy. Ghosts from the town are now battling it out with ghosts from the festival, and the grounds are closed to all. But is it possible to appease everyone?