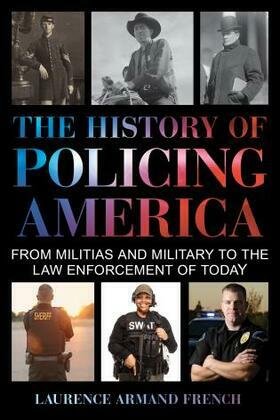 The History of Policing America

America’s first known system of law enforcement was established more than 350 years ago. Today law enforcement faces issues such as racial discrimination, use of force, and Body Worn Camera (BWC) scrutiny. But the birth and development of the American police can be traced to a multitude of historical, legal and political-economic conditions. In The History of Policing America: From Militias and Military to the Law Enforcement of Today, Laurence Armand French traces how and why law enforcement agencies evolved and became permanent agencies; looking logically through history and offering potential steps forward that could make a difference without triggering unconstructive backlash.

From the establishment of the New World to the establishment of the Colonial Militia; from emergence of the Jim Crow Era to the emergence of the National Guard; from the creation of the U.S. Marshalls, federal law enforcement agencies, and state police agencies; this book traces the historical geo-political basis of policing in America and even looks at how certain events led to a call for a better trained, and subsequently armed, police, and the de facto militarization of law enforcement.

The current controversy regarding policing in America has a long, historical background, and one that seems to repeat itself. The History of Policing America successfully portrays the long lived motto you can’t know who you are until you know where you’ve come from.