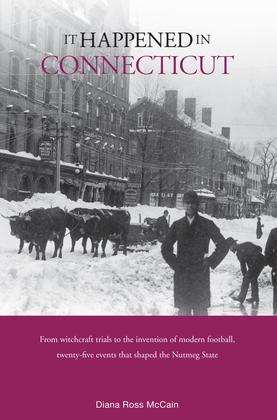 It Happened in Connecticut

All-new additions to the entertaining and bestselling line of regional history for all ages!

IT HAPPENED IN CONNECTICUT (TwoDot)

More than twenty true stories from the Nutmeg State—including how it got its nickname, as well as the country's first witch trials, the Charter Oak incident, and the invention of modern football. Diana Ross McCain is a historian from Durham, Connecticut.

IT HAPPENED IN PHILADELPHIA

The rich history of the City of Brotherly Love comes alive with this compelling selection of true stories. Learn about William Penn's “Holy Experiment,” the background of “American Bandstand,” and the creation of the “Mummer's” parade. This book has wide appeal for both history buffs and browsing tourists. Scott Bruce is a comedian and host of a PBS-TV trivia show called “The Pennsylvania Game.”

IT HAPPENED ON THE SANTA FE TRAIL

This emigrant trail stretching from central Missouri to northern New Mexico was a critical artery in opening up the American West. This collection of suspenseful-but-true stories includes the tragedy of the Sand Creek Massacre as well as the discovery of “Boone's Lick.” Other tales include appearances by Spanish conquistadors, cowboys of every stripe, and even the man who cured malaria. Stephen Glassman is a former Fulbright scholar and currently a professor at Embry-Riddle Aeronautical University in Daytona Beach, Florida.

IT HAPPENED IN MINNESOTA

From the heartland of America come these thirty compelling tales. Starting with a harrowing battle between white settlers and Sioux Indians, swinging around to encompass a bank robbery masterminded by Jesse James, and ending with the creation of the Mall of America, Minnesota has never seen its history written quite like this. Darrell Ehrlick is editor of Minnesota's Winona Daily News and lives with his wife on the state border in Trempealeau, Wisconsin.