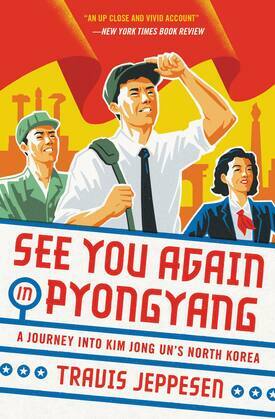 See You Again in Pyongyang

From ballistic missile tests to stranger-than-fiction stories of purges and assassinations, news from North Korea never fails to dominate the global headlines. But what is life there actually like?

In See You Again in Pyongyang, Travis Jeppesen culls from his experiences living, traveling, and studying in North Korea to create a multi-faceted portrait of the country and its idiosyncratic capital city. Not quite memoir, not quite travelogue, not quite history book, Jeppesen offers a poignant and utterly original examination of the world's strangest country.

Anchored by the experience of his five trips to North Korea, Jeppesen weaves in his observations and interactions with citizens from all walks of life, constructing a narrative rich in psychological detail, revealing how the North Korean system actually functions and perpetuates itself in the day-to-day, beyond the propaganda-fueled ideology.

He challenges the Western notion that Pyongyang is merely a "showcase capital" where everything is staged for the benefit of foreigners, as well as the idea that Pyongyangites are brainwashed robots. Going beyond the clichés of "taboo tourism" and the "good versus evil" tenor of politicians and media reports, See You Again in Pyongyang is an essential addition to the literature about one of the world's most fascinating and mysterious places.