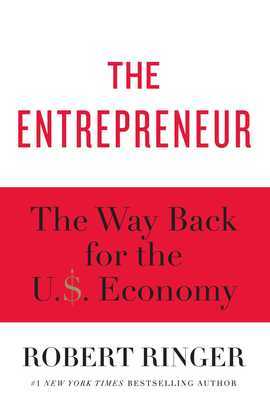 The Entrepreneur: The Way Back for the U.S. Economy

It is the government's duty to provide for the general welfare . . . FALSE

The growing gap between the rich and the poor proves that capitalism has failed . . . FALSE

The government has the authority to redistribute wealth through regulations and taxes . . . FALSE

All men are created equal. But not all taxpayers!

Progressives, or Retrogressives, as #1 New York Times bestselling author Robert Ringer calls those on the far left who are, in reality, against progress, believe in an all-powerful central government that has the authority to meddle in both the economy and in the lives of individual citizens. Retrogressives naively believe that the government has a moral obligation to "help" those in need, but nowhere in the Constitution is there an enumerated power to that effect.

In a Retrogressive utopia, life is risk free for everyone. But a government that prevents its citizens from failing actually prohibits them from succeeding. So-called social programs, such as food stamps, the minimum wage, and draconian taxes are designed to redistribute wealth but are lethal to the very people whose success is most critical to this nation's prosperity: Entrepreneurs.

In this provocative new book, Ringer examines what it takes for these unsung heroes to succeed in an environment that is increasingly hostile toward small businesses. Perhaps the most maligned and beleaguered individuals in the United States, Entrepreneurs are the easiest targets for the government's insatiable appetite to exercise control over the economy. Yet, left alone to do what they do best, Entrepreneurs are able to innovate better products and services than the government could ever hope to provide; create jobs; reinvest much of their profits into expanding their businesses; and, as a result, grow the economy, and thereby improve the lives of millions of people through the self-regulating "invisible hand" of the marketplace.

The time has come for Americans to tell politicians they don't want any more quick fixes. What we need is for government to get out of the way and allow the Entrepreneur to move our country forward.