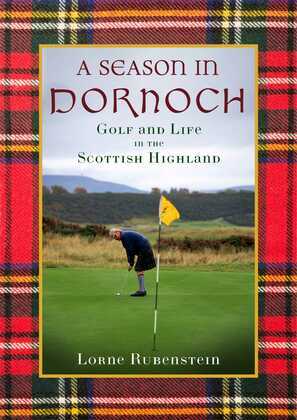 A Season in Dornoch: Golf and Life in the Scottish Highlands

The town of Dornoch, Scotland, lies at nearly the same latitude as Juneau, Alaska. A bit too far removed for the taste of the Royal and Ancient Golf Club of St. Andrews, the Royal Dornoch Golf Club has never hosted a British Open, but that has hardly diminished its mystique or its renown. In an influential piece for The New Yorker in 1964, Herbert Warren Wind wrote, "It is the most natural course in the world. No golfer has completed his education until he has played and studied Royal Dornoch."
If any town in the world deserves to be described as "the village of golf," it's Dornoch. You can take the legendary links away from St. Andrews, and you'll still have a charming and beautiful university town with great historic significance; take the links away from Dornoch and it would be as little noted or known as its neighbors Golspie, Tain, and Brora. (The town is forty miles north of Inverness, generally thought of as the northernmost outpost of civilization in Scotland.) The game has been played in Dornoch for some four hundred years. Its native son Donald Ross brought the style of the Dornoch links to America, where his legendary, classic courses include Pinehurst #2, Seminole, and Oak Hill.
Lorne Rubenstein decided to spend a summer in Dornoch to clear the muddle from his golfing mind and to rediscover the natural charms of the game he loves. But in the Highlands he found far more than bracing air and challenging greens. He found a people shaped by the harshness of the land and the difficulty of drawing a living from it, and still haunted by a historic wrong inflicted on their ancestors nearly two centuries before. Rubenstein met many people of great thoughtfulness and spirit, eager to share their worldviews, their life stories, and a wee dram or two. And as he explored the empty, rugged landscape, he came to understand the ways in which the thorny, quarrelsome qualities of the game of golf reflect the values, character, and history of the people who brought it into the world.
A Season in Dornoch is both the story of one man's immersion in the game of golf and an exploration of the world from which it emerged. Part travelogue, part portraiture, part good old-fashioned tale of matches played and friendships made, it takes us on an unforgettable journey to a marvelous, moody, mystical place.