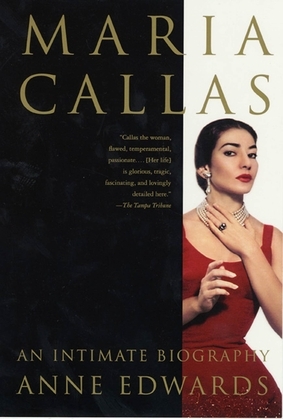 Maria Callas continues to mesmerize us decades after her death, not only because she was indisputably the greatest opera diva of the 20th century, but also because both her life and death were shrouded in a Machiavellian web of scandal, mystery and deception. Now Anne Edwards, well known for her revealing and insightful biographies of some of the world's most noted women, tells the intimate story of Maria Callas?her loves, her life, and her music, revealing the true woman behind the headlines, gossip and speculation.

The second daughter of Greek immigrant parents, Maria found herself in the grasp of an overwhelmingly ambitious mother who took her away from her native New York and the father she loved, to a Greece on the eve of the Second World War. From there, we learn of the hardships, loves and triumphs Maria experienced in her professional and personal life. We are introduced to the men who marked Callas forever?Luchino Visconti, the brilliant homosexual director who she loved hopelessly, Giovanni Battista Meneghini, the husband thirty years her senior who used her for his own ambitions, as had her mother, and Aristotle Onassis, who put an end to their historic love affair by discarding her for the widowed Jacqueline Kennedy. Throughout her life, Callas waged a constant battle with her weight, a battle she eventually won, transforming herself from an ugly duckling into the slim and glamorous diva who transformed opera forever, whose recordings are legend, and whose life is the stuff of which tabloids are made.

Anne Edwards goes deeper than previous biographies of Maria Callas have dared. She draws upon intensive research to refute the story of Callas's "mystery child" by Onassis, and she reveals the true circumstances of the years preceding Callas's death, including the deception perpetrated by her close and trusted friend. As in her portraits of other brilliant, star-crossed women, Edwards brings Maria Callas?the intimate Callas?alive.