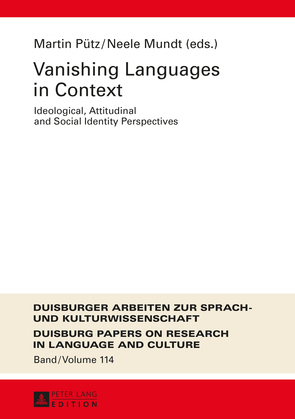 This volume grew out of the 36 International LAUD Symposium, which was held in March 2014 at the University of Koblenz-Landau in Landau, Germany. There is general consensus among language experts that slightly more than half of today’s 7,000 languages are under severe threat of extinction even within fifty to one hundred years. The 13 papers contained in this volume explore the dramatic loss of linguistic diversity, why this matters, and what can be done and achieved to document and support endangered languages especially in the context of an ever increasing globalized world. The issue of vanishing languages is discussed from a variety of methodologies and perspectives: sociolinguistics, language ecology, language contact, language policy/planning, attitudes and linguistic inequalities.