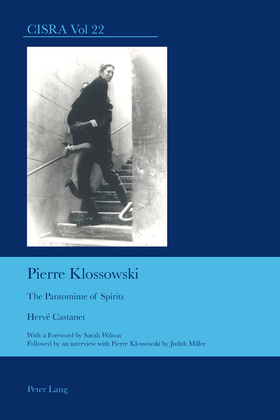 This book examines the many facets of the work of Pierre Klossowski (1905–2001). Klossowski first established himself as a writer and was known and admired by peers such as Bataille, Blanchot, Gide, Foucault, Deleuze and Lacan. But in 1972 he gave up writing to devote himself to his ‘mutism’: painting made up of large coloured drawings. In time he became as famous a painter as he had been a writer and theorist. Klossowski now has two separate groups of commentators: those concerned with his writings and those with his painting, with little overlap between the two.
Here, this separation is explicitly removed. Klossowski’s entire œuvre revolved around the concept of the gaze. Rarely has the gaze been so radically interpreted – as an active, mobile, evanescent object that breaks down the connections between representation and the visible. How is one to see the invisible divinity? This question plagued Klossowski, and he displaced it onto pornographic rituals. The pantomime of spirits is the scene, fixed in silence, where bodies meet – a knotting of desiring body and dogmatic theology. A creator of simulacra, Klossowski attempted to exorcise the ‘obsessive constraint of the phantasm’ that subjugated him in all these scenes.
Translated from the French by Adrian Price in collaboration with Pamela King.