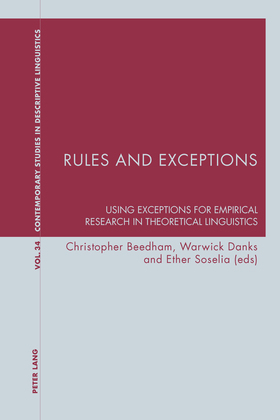 This book assembles a collection of papers first presented at the Summer School and Conference on the Method of Lexical Exceptions held at the University of St Andrews, Scotland, 2-8 September 2007, which explored an area of linguistics now referred to as ‘the method of exceptions and their correlations’.
Recognition of the work of Saussure was impeded during his lifetime by the Junggrammatiker (Neogrammarians) and their view of exceptions, but this book incorporates exceptions into a Saussurean approach. Exceptions to rules are treated here not as something wilful and inexplicable, but as a clue to what has gone wrong in the original rule.
The topics covered are the passive, irregular verbs, morphology, transitivity, light verb constructions, resultative verbs, compound nouns, phonology, colour terms, historical-comparative reconstruction, language teaching, Saussurean structuralism and the approach of the Junggrammatiker to exceptions. The languages addressed are English, Arabic, Georgian, Turkish, Russian, the Cushitic languages and German. Grammar and linguistics are usually thought of as purely theoretical disciplines, but this book demonstrates how to use exceptions to conduct ‘experiments’ in the manner of the natural sciences, which leads empirically to better theory.