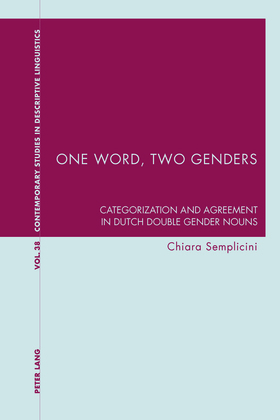 Dutch is a peculiar language in that certain nouns have more than one gender. This first academic study of double gender nouns (DGNs) in the Dutch language investigates this anomaly. First assigned a lexicological classification, the DGNs are then analysed contextually by means of a corpus study. DGNs are shown to be part of a generalized restructuring of Dutch gender as a whole. No longer a fringe phenomenon in the Dutch gender system, this study shows them to be catalysts in the transition towards a (more) semantic system, a process that is much more advanced than commonly assumed.