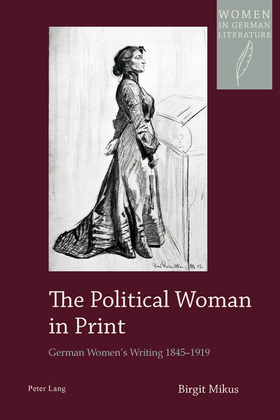 The Political Woman in Print

This book analyses the depiction and function of politically active women in novels by six female authors from the margins of the democratic revolution of 1848 and the first German women’s movement: Louise Aston, Malwida von Meysenbug, Mathilde Franziska Anneke, Fanny Lewald, Louise Otto-Peters, and Hedwig Dohm. What was their political stance in relation to democratic developments and women’s rights? How did they render their political convictions into literary form? Which literary images did they use, criticise, or invent in order to depict politically active women in their novels in a positive light? Which narrative strategies were employed to ‘smuggle’ politically and socially radical ideas into what were sometimes ostensibly conventional plots? These authors wrote before modern feminist theory was established; however, their proto-feminist observations, demands, and discursive tactics contributed much to the formation and institutionalisation of feminist thought. This book contextualises the authors’ works in their historical and social environment in order to evaluate what can be considered radical and political in the period 1845-1919.