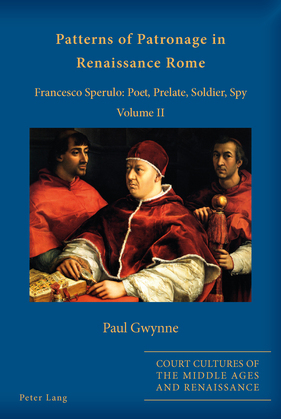 Patterns of Patronage in Renaissance Rome

This book is also available as a set, together with Volume I.
Please visit www.peterlang.com/view/product/84550

Patterns of Patronage in Renaissance Rome is the first full-length study of the life and works of Francesco Sperulo of Camerino (1463–1531). In a remarkable career during which the poet progressed from serving as a soldier of fortune in the service of Cesare Borgia to an Italian bishopric, Sperulo produced a significant body of Latin poetry, here presented in a critical edition for the first time. An impressive array of contemporary figures including Leonardo da Vinci, Isabella d’Este, Raphael and Baldassare Castiglione appear in his verse. By placing his work within the larger historical, literary, political and social context, this study, published in two volumes, sheds light on the role played by neo-Latin poetry at the papal court and documents the impact of classical culture in Rome during the period usually referred to as «the High Renaissance».
Volume II presents a complete critical edition of all Sperulo’s surviving Latin works in poetry and prose, with translation and commentary. This remarkable œuvre documents Cesare Borgia’s conquest of Faenza, suggests to Raphael a programme for the fresco decoration of the Villa Madama, records conversations on love with Isabella d’Este, describes the newly-discovered antiquities and reports a sensational murder. Two orations, delivered on the eve of the Sack of Rome, celebrate a treaty between Spain and France and a Polish victory in the Crimean steppes.