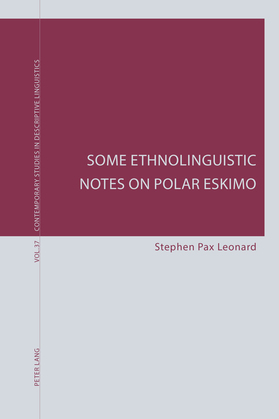 Some Ethnolinguistic Notes on Polar Eskimo

This book serves as an insightful ethnographic introduction to the language and oral traditions of the Inugguit, a sub-group of the Inuit who live in north-west Greenland. A unique work, it encompasses an overview of the grammar of Polar Eskimo – a language spoken by about 770 people – as well as a description of their oral traditions (drum-dancing and story-telling) and the most extensive glossary of the language compiled to date. The book presents the Polar Eskimo language in the orthography established by the author in conjunction with the local community in Greenland, an extremely difficult task for a language made up of such an aberrant phonology and with no written tradition. By exploring their ways of speaking and ways of belonging, Leonard provides an original ethnographic interpretation of the nature of Inugguit social organization and their world-view. Some Ethnolinguistic Notes on Polar Eskimo will serve as an invaluable resource for linguists who specialise in the Eskimo-Aleut group and will be of much interest to anthropologists working in the Arctic region.