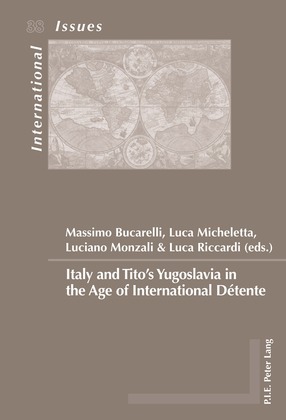 Italy and Tito’s Yugoslavia in the Age of International Détente

World War II and East-West confrontation redefined borders between Italy and Yugoslavia, reshaped national frontiers and adversely affected political relations. As a result, major quarrels and disputes arose over territorial claims, demarcation of State boundaries, expulsion of national minorities, and diverging visions on international and domestic politics. It was only in the 1960s and 1970s, during the years of Détente, that rapprochement between Rome and Belgrade became possible and normalization of bilateral relations was attained. Long-lasting territorial disputes, such as the Trieste question, were solved and bilateral relationship greatly improved, so much so that Belgrade became an important asset in Italy’s Balkan and Adriatic strategy, while Rome was a sort of bridge between Socialist Yugoslavia and Western Europe.
This book is intended to shed light on the process of Italian-Yugoslav normalization and rapprochement, which ultimately brought to the Adriatic Détente. Based on a wide collection of primary sources and documentary materials, it aims to contribute to a better understanding of the history of the Adriatic region, a conflicted European space that had been affected by territorial disputes and ethnic strife for decades during the 20 century.