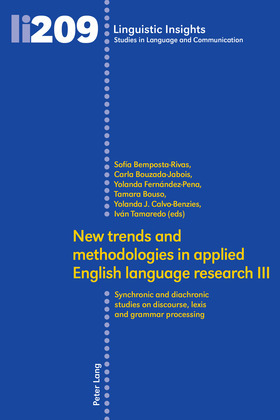 This volume includes eleven papers pertaining to different areas of linguistics and organised into three sections. Part I contains diachronic studies which cover data from Middle English to Present-Day English and which explore phenomena such as the status of extender tags, the distribution of free adjuncts, post-auxiliary ellipsis, and the use of ‘ephemeral’ concessive adverbial subordinators. Part II comprises studies on grammar and language processing dealing with topics such as the interaction between syntactic and structural complexity and verbal agreement with collective subjects, the influence of distributivity and concreteness on verbal agreement, the interaction of complexity and efficiency in pronoun omission in Indian English and Singapore English, and the methods and approaches used for grammar teaching in modern EFL/ESL textbooks. Finally, Part III revolves around lexis, discourse and pragmatics, with papers that discuss the development of the discoursal representation of social actors in Argentinian newspapers after the military dictatorship, the construction of women’s gender identity through positive and negative emotions in women’s magazines, and spelling-to-sound correspondence on Twitter.