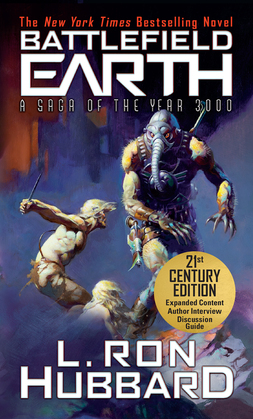 As big as Star Wars. As desperate as Hunger Games. A thousand years in the future, an alien empire has overrun the planet and the human race has become an endangered species. Now all that stands between mankind and total extinction is a courageous young man determined to rally the scattered tribes of his species to take on the technologically advanced oppressors.

It's one of the bestselling sci-fi novels of all time—nonstop action, adventure and intergalactic intrigue.

"Over 1,000 pages of thrills, spills, vicious aliens and noble humans. I found it un-put-downable." —Neil Gaiman

"The futuristic tale, featuring aliens and humans fighting for survival, comes across as compelling and believable...." —Booklist

"Think of the Star Wars sagas and Raiders of the Lost Ark, mix in the triumph of Rocky I, II and III and you have captured the exuberance, style and glory of Battlefield Earth."—Baltimore Sun