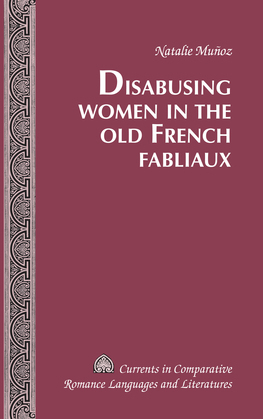 Disabusing Women in the Old French Fabliaux provides a much-needed reevaluation of the role of women in the fabliaux. Spanning the late twelfth and thirteenth centuries, the fabliaux are short, ribald tales written in verse by mostly anonymous male authors. Their varied portrayals of female characters have traditionally been considered simply misogynistic. Despite recent scholarship contending that the fabliaux are not as anti-feminist as previously thought, there has been until now no full-length study of women in the fabliaux.
Serving as critics of medieval institutions such as courtly love and knighthood, women in diverse roles affirm their agency as subjects through the manipulation of language. The depiction of these women asserting their subjectivity within medieval literary and cultural conventions often distorts the normal relations between the sexes, putting into question the very gender framework within which the fabliaux operate. Written by men for men, the closing moral frequently serves to reassert traditional male dominance, thereby reducing any uneasiness the audience may have felt. Thus the fabliaux cast women as powerful users of language all the while acknowledging the limits of their subversion.