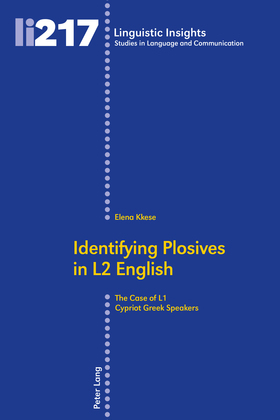 This volume presents the results of two tasks examining the acquisition of plosive voicing contrasts in L2 English by college students with Cypriot Greek (CG) backgrounds. The tasks focus on the different factors affecting plosive identification and the types of errors involving plosives. With respect to the first issue, the phonetic perception of plosives turns out to be better in voiceless consonants compared to their voiced counterparts, thus providing evidence for the importance of the voicing contrast factor. With respect to the second issue, the results point to the same direction since it appears that L2 users performed significantly better in voiceless plosives. It is also indicated that they were able to perceive voiced plosives but they treated such instances as a /nasal+voiced plosive/sequence (prenasalised plosives). Therefore, the overall results seem to agree mostly with the speech perception approach suggesting that voiced plosives are realised differently in CG while the difficulties of the L2 CG users with plosives seem to be attributed to VOT differences between the L1 and the L2.