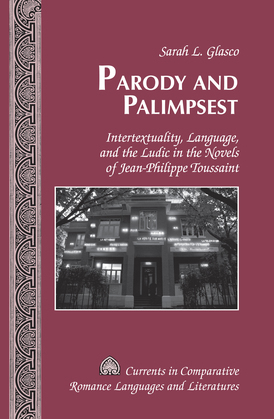 Parody and Palimpsest: Intertextuality, Language, and the Ludic in the Novels of Jean-Philippe Toussaint adds to the emerging body of work on intertextuality through expansion of critical examinations of the novels of this award-winning author, presenting him as the ultimate magister ludi. Sarah L. Glasco links Jean-Philippe Toussaint’s novels to cross-disciplinary texts that include not only Russian, American, and Japanese literatures, but also film and visual art. Toussaint alludes to the works of numerous French canonical authors, such as Pascal, Flaubert, Gide, Proust, and Apollinaire, with a multicultural mix of Faulkner, Beckett, Nabokov, and Kawabata, for instance, and the works of filmmakers, painters, and ancient philosophers like Wong Karwai, Mark Rothko, and Aristotle. Ultimately, intertextuality in Toussaint’s novels is linked to global cultures and new media via his contemporary literary landscapes. This in-depth study reveals, presents, and analyzes a multiplicity of intertexts, depicting the inner workings of their playful relationships to the texts as a whole, how they are intricately interwoven into Toussaint’s narratives, and also how they relate to one another. Through a process of rereading and reinterpreting Toussaint’s texts, Parody and Palimpsest illuminates both linguistic and narrative subversions, parodies, and pastiches, and, subsequently, Toussaint’s ludic landscapes emerge. Readers are then able to unmask other identities his texts can embody in order to rediscover them through the language, literature, art, products, and thus culture of others.