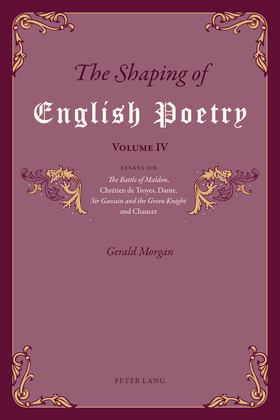 This fourth volume of essays under the title The Shaping of English Poetry consolidates the work of the previous three volumes on the great subjects of English literature in the Medieval and Renaissance periods. The Norman Conquest of England built upon the rich foundation of Anglo-Saxon England but did not destroy it; thus the present volume begins with the commemoration of English heroism in The Battle of Maldon. In the late twelfth century we encounter in Chrétien de Troyes's seminal romance Le Chevalier de la Charrete a new kind of hero in Lancelot, abject and obedient before his mistress, although Chrétien himself is not an uncritical admirer of the sanctity of adulterous love. Hence the importance of Dante's exposition of love in Purgatorio, XVIII, which forms a background to the essays here on Sir Gawain and the Green Knight and the Parliament of Fowls. The volume concludes with essays on Chaucer's Knight's, Monk's and Nun's Priest's Tales, which form part of a long-term project to interpret the Canterbury Tales as a unified whole and not merely a series of fragments awaiting revision on Chaucer's death.