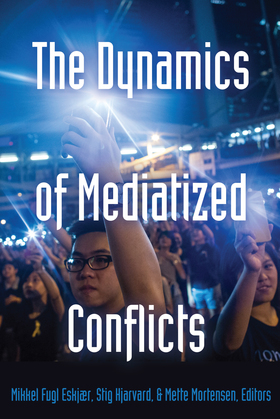 The Dynamics of Mediatized Conflicts

This book engages with the mediatized dynamics of political, military and cultural conflicts. In today’s global and converging media environment, the interrelationship between media and conflict has been altered and intensified. No longer limited to the realms of journalism and political communication, various forms of new media have allowed other social actors to communicate and act through media networks. Thus, the media not only play an important role by reporting conflicts; they have also become co-constitutive of the ways conflicts develop and spread.
The first part of the book, Transnational Networks, addresses the opportunities and challenges posed by transnational media to actors seeking to engage in and manage conflicts through new media platforms. The second part, Mobilising the Personal: Crossing Public and Private Boundaries, concerns the ways in which media framings of conflicts often revolve around personal aspects of public figures. The third part, Military, War, and Media, engages with a classic theme of media studies – the power relationship between media, state, and military – but in light of the mediatized condition of modern warfare, in which the media have become an integrated part of military strategies.
The book develops new theoretical arguments and a series of empirical studies that are essential reading for students and scholars interested in the complex roles of media in contemporary conflicts.