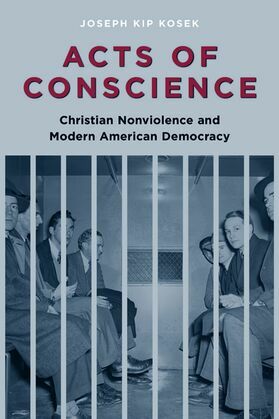 In response to the massive bloodshed that defined the twentieth century, American religious radicals developed a modern form of nonviolent protest, one that combined Christian principles with new uses of mass media. Greatly influenced by the ideas of Mohandas Gandhi, these "acts of conscience" included sit-ins, boycotts, labor strikes, and conscientious objection to war.

Beginning with World War I and ending with the ascendance of Martin Luther King Jr., Joseph Kip Kosek traces the impact of A. J. Muste, Richard Gregg, and other radical Christian pacifists on American democratic theory and practice. These dissenters found little hope in the secular ideologies of Wilsonian Progressivism, revolutionary Marxism, and Cold War liberalism, all of which embraced organized killing at one time or another. The example of Jesus, they believed, demonstrated the immorality and futility of such violence under any circumstance and for any cause. Yet the theories of Christian nonviolence are anything but fixed. For decades, followers have actively reinterpreted the nonviolent tradition, keeping pace with developments in politics, technology, and culture.

Tracing the rise of militant nonviolence across a century of industrial conflict, imperialism, racial terror, and international warfare, Kosek recovers radical Christians' remarkable stance against the use of deadly force, even during World War II and other seemingly just causes. His research sheds new light on an interracial and transnational movement that posed a fundamental, and still relevant, challenge to the American political and religious mainstream.