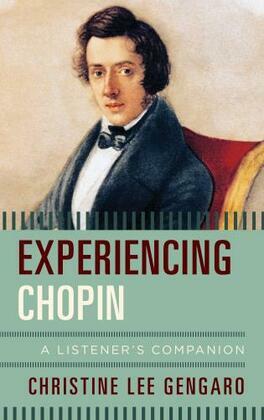 Fryderyk Chopin’s career is intricately entwined with the piano. Although he made forays into orchestral and chamber work, the vast majority of Chopin’s pieces feature the piano. While his relatively brief life shortened his potential contribution as a composer, the originality, richness, and quality of his work is undeniable. His harmonies were often surprising, the rhythms flexible, and the music dramatic.

In Experiencing Chopin: A Listener’s Companion, Christine Lee Gengaro surveys Chopin’s position as a composer at a time when the piano stood at the center of musical and social life. Throughout, she shines a spotlight on Chopin and his music, which illuminated the Romantic period in which he lived, the social and artistic climate that surrounded him, and the importance of the individual artist at a time of political foment. Gengaro considers the different genres among Chopin’s works, linking each to the historical, social, and biographical issues that shaped them.