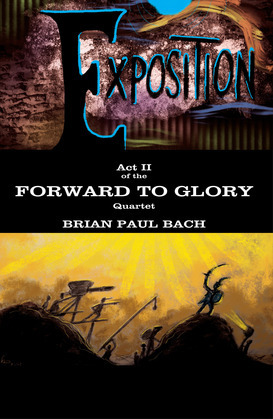 Butterbugs is becoming somebody. He has come to Hollywood to act, and as an aspiring performer, so far, he is a survivor. His dream persists... though barely. But something’s coming.
He has had to endure nearly crushing challenges with a tenacity deserving its own kind of award. Perhaps simple luck is all that’s needed. It soon appears, from unexpected quarters. And starting there, his ascent begins. Butterbugs is about to be exposed – as actor, as talent, as star. A splash like no other will soon inundate Hollywood. In FORWARD TO GLORY’s guise as a four-part epic-noir-satire, EXPOSITION continues the grand procession commenced in TEMPERING. Proudly episodic, unabashedly sensational, it is a saga geared to a seasoned readership eager to embrace a daring narrative with determination and relish. As he advances, Butterbugs is gifted with the assistance of many: Vonda – the superstar, who literally picks him off the street; The Angry Black Priest – the super-artist, who, out of tragedy, teaches him wisdom; Sonny Projector – the super-agent, who sees something exceptional in this intriguing unknown; Old Atrocity – the super-technician, whose cinematic expertise perfectly compliments the actor’s unique persona; Cody, Saskia and Justy – women to love, who love him; Pepper and Prairie – whose very existence may be nothing more than shadows on a screen but whose power is projected upon him; and Heatherette – whose reappearance saves his life.
The FORWARD TO GLORY Quartet
I. Tempering – the Actor’s struggles
II. Exposition – the Actor’s rise
III. Apotheosis – the Actor’s climax
IV. Beyond Fin – the Actor’s legend