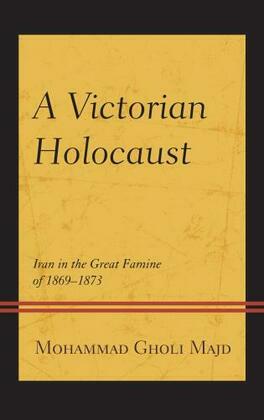 The death by famine of tens of millions of human beings in Asia and Africa during the Victorian era (1837–1901) is “the secret history of the nineteenth century” about which Western history books contain nothing. The Great Famine of 1869–1873 in Iran took 10–12 million lives, or two-thirds of the population, and is part of this secret history. While the famines that ravaged China and India during 1876 to 1902 have received some recent scrutiny, the precursor of these cataclysmic famines, the Great Famine of 1869–1873 in Iran, has remained practically unknown. This study is the first monograph on the subject in the English language. This famine in Iran killed on a scale similar to the 1876–79 famine in China, which has been called the worst to afflict the human species.

This study is based on British diplomatic reports and semi-official sources, European travel accounts, Persian documents and writings, British and American newspapers, and the reports by American missionaries who witnessed the famine. These sources enable one to provide a chronological and numerical account of the death and suffering as the famine spread from the southern and central regions to the rest of the country. The population statistics and rich micro-level data on famine losses in rural and urban areas indicate that during the nearly five years of famine, two-thirds of the population had perished. Not until 1910 did Iran come close to recovering its 1869 population. Soon after, Iran was plunged into the Great Famine of 1917–19, which claimed another 8–10 million, and again the 1942–43 famine and typhus epidemic that carried off an additional 4 million persons. In the seventy-five year span of 1869–1944, Iran had suffered three famines that had taken 25 million lives. Iran’s 1944 population of 10–12 million was unchanged from 11 million recorded in 1841, a perfect case of a Malthusian catastrophe. It is difficult to find another country in which a century of population growth had been wiped out by famine. Having previously described and quantified the 1917–19 and 1942–43 famines, Majd does the same for the 1869–73 famine. This book is the third of a trilogy on famines in Iran during the last 150 years.