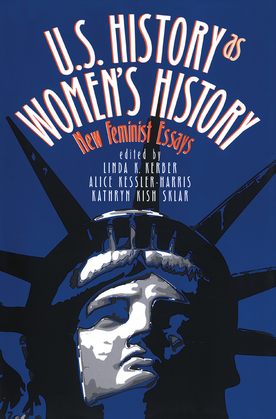 This outstanding collection of fifteen original essays represents innovative work by some of the most influential scholars in the field of women's history. Covering a broad sweep of history from colonial to contemporary times and ranging over the fields of legal, social, political, and cultural history, this book, according to its editors, 'intrudes into regions of the American historical narrative from which women have been excluded or in which gender relations were not thought to play a part.' State formation, power, and knowledge have not traditionally been understood as the subjects of women's history, but they are the themes that permeate this book. Individually and together, the essays explore how gender serves to legitimize particular constructions of power and knowledge and to meld these into accepted practice and state policy. They show how the field of women's history has moved from the discovery of women to an evaluation of social processes and institutions. The book is dedicated to pioneering women's historian Gerda Lerner, whose work inspired so many of the contributors, and it includes a bibliography of her works. from the book The contributors to this volume grew up into a world in which history was rigidly limited. It paid little attention to social relationships, to issues of race, to the concerns of the poor, and virtually none to women. Women figured in it for their ritual status, as wives of presidents like Abigail Adams or Dolly Madison; for their role as spoilers, from the witches of Salem to Mary Todd Lincoln, or for their sacrificial caregiving, like Clara Barton or Dorothea Dix. Even when women like Sojourner Truth, Jane Addams, and Eleanor Roosevelt were named by historians, the radical substance of their work and their lives was routinely ignored. A very few historians of women--Eleanor Flexner, Julia Cherry Spruill, Caroline Ware--worked on the margins of the profession, their contributions unappreciated, and their writing vulnerable to the charge of irrelevance. Contents Part 1. State Formation Linda K. Kerber on women and the obligations of citizenship Kathryn Kish Sklar on two political cultures in the Progressive Era Linda Gordon on women, maternalism, and welfare in the twentieth century Alice Kessler-Harris on the Social Security Amendments of 1939 Nancy F. Cott on marriage and the public order in the late nineteenth century Part 2. Power Nell Irvin Painter on 'soul murder' as a legacy of slavery Judith Walzer Leavitt on Typhoid Mary and early twentieth-century public health Estelle B. Freedman on women's institutions and the career of Miriam Van Waters William H. Chafe on how the personal translates into the political in the careers of Eleanor Roosevelt and Allard Lowenstein Jane Sherron De Hart on women, politics, and power in the contemporary United States Part 3. Knowledge Barbara Sicherman on reading Little Women Joyce Antler on the Emma Lazarus Federation's efforts to promulgate women's history Amy Swerdlow on Left-feminist peace politics in the cold war Ruth Rosen on the origins of contemporary American feminism among daughters of the fifties Darlene Clark Hine on the making of Black Women in America: An Historical Encyclopedia