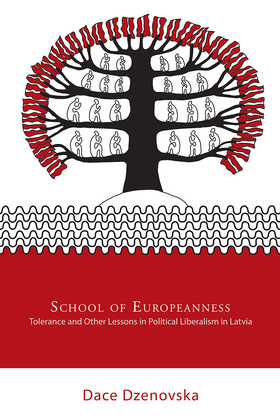 In School of Europeanness, Dace Dzenovska argues that Europe’s political landscape is shaped by a fundamental tension between the need to exclude and the requirement to profess and institutionalize the value of inclusion. Nowhere, Dzenovska writes, is this tension more glaring than in the former Soviet Republics.

Using Latvia as a representative case, School of Europeanness is a historical ethnography of the tolerance work undertaken in that country as part of postsocialist democratization efforts. Dzenovska contends that the collapse of socialism and the resurgence of Latvian nationalism gave this Europe-wide logic new life, simultaneously reproducing and challenging it. Her work makes explicit what is only implied in the 1977 Kraftwerk song, Trans-European Express: hierarchies prevail in European public and political life even as tolerance is touted by politicians and pundits as one of Europe’s chief virtues.

School of Europeanness shows how post–Cold War liberalization projects in Latvia contributed to the current crisis of political liberalism in Europe, providing deep ethnographic analysis of the power relations in Latvia and the rest of Europe, and identifying the tension between exclusive polities and inclusive values as foundational of Europe’s political landscape.