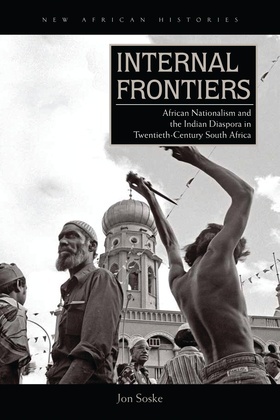 In this ambitious new history of the antiapartheid struggle, Jon Soske places India and the Indian diaspora at the center of the African National Congress’s development of an inclusive philosophy of nationalism. In so doing, Soske combines intellectual, political, religious, urban, and gender history to tell a story that is global in reach while remaining grounded in the everyday materiality of life under apartheid.

Even as Indian independence provided black South African intellectuals with new models of conceptualizing sovereignty, debates over the place of the Indian diaspora in Africa (the “also-colonized other”) forced a reconsideration of the nation’s internal and external boundaries. In response to the traumas of Partition and the 1949 Durban Riots, a group of thinkers in the ANC, centered in the Indian Ocean city of Durban and led by ANC president and Nobel Peace Prize winner Albert Luthuli, developed a new philosophy of nationhood that affirmed South Africa’s simultaneously heterogeneous and fundamentally African character.

Internal Frontiers is a major contribution to postcolonial and Indian Ocean studies and charts new ways of writing about African nationalism.