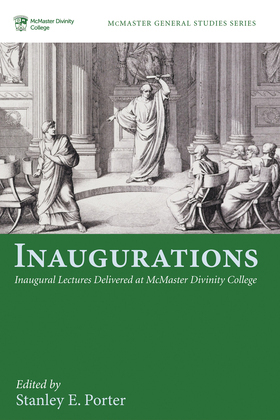 The inaugural lecture is a tradition that has been practiced in western universities for centuries. These lectures originated in the great universities of continental Europe, spread to Great Britain, and then to North America. The tradition has now been appropriated further by universities around the world and especially of late in majority world countries. The inaugural lecture is a form of academic discourse, in which the recipient of a suitable academic honor--usually the bestowal of a form of professorial appointment--offers a public lecture in recognition of the event. McMaster Divinity College follows in this academic tradition by attaching public inaugural lectures to the appointment of scholars to professorial positions, and in particular to those appointed to endowed and named professorial chairs within the institution. McMaster Divinity College currently has six such endowed, named chairs held by its faculty. This volume contains the six lectures by those in these six chairs, representing the fields of preaching, theology, pastoral studies, Christian worldview, ministry studies, and Christian history. Each of these inaugural lectures is a contribution to scholarship in the field and a token of the inaugural professorial lecture.